Everyone who visits the Tongass National Forest in southeast Alaska wants to know: have you seen evidence of climate change? As if experiencing climate change was like catching a fleeting glimpse of a wolf slipping through the trees.

There is no single moment that defines our experience of climate change in Alaska. Single moments are just weather – strange weather, for sure – but just weather nonetheless. If climate change is like that elusive wolf in any way, it’s that even if you can’t see the thing directly, you know by a thousand signs that it’s there. I have been living in Juneau for about six years now. I have heard old timers complain about hot summers and warm, wet winters. I have seen the famous Mendenhall Glacier shrink and my ski pass go unused thanks to snow that never came. I have seen tracks and heard howls, found tracks, scat and fur…but I have never seen the wolf.

In February, my friend Nick and I wandered up above the Mendenhall Glacier to look for grouse and ptarmigan for the table and wolf sign for the soul. Now, I’m not claiming any particular spiritual benefits or metaphysical importance associated with any particular species of canine, but a place with wolves is a wild place. Wild places excite me. These don’t need to be places without humans, but places where other species write their own stories. I am excited by the drama of life played out on a beautiful and merciless stage. Wolf sign is proof of that drama, a verification of wildness.

Nick and I were reveling in some rare sunshine. We’d had heavy rain, day after day for almost two months. Temperatures had been just warm enough that it didn’t snow. We hiked up a well-worn trail past a rowdy school group, found an unmarked trail, and climbed a narrow draw into an open valley of meadows. We were more than 1,000 feet above sea level, but there was no snow on the brown grass. No snow to show prints. A few canine prints lingered back in the woods, but they were small and mingled with human tracks. Wolf tracks stand out for their size, but they also tend to follow a more direct path. They know where they are going.

The sun was strong, though it swung low across the winter sky. The Tongass is a temperate rainforest, which means that wet weather is possible even in winter. So while it would be hard to pin one rainy winter on climate change, the forest is clearly changing. The warming trend is affecting ocean temperature and acidity – warmer surface temperatures can be a negative indicator for salmon populations; cedar trees, struggling due to lack of snow, are expanding their range northward.

Each summer, approximately 1 million people come to southeast Alaska on cruise ships. Tourism has replaced logging as the main economic driver, yet many are coming here because of one particular sign of climate change: rapidly melting glaciers. In an interview with High Country News, John Neary, Manager of the Mendenhall Glacier Visitor Center, described a new sector in the tourism market of people who want to “see it for themselves.”  In the more than 30 years since Neary first arrived in southeast Alaska, the Mendenhall Glacier has receded by more than a mile, and the number of visitors to the glacier has nearly tripled to 450,000 a year.

Hundreds of thousands of people will come to see the melting Mendenhall Glacier, but they will also gather this summer along the banks of Mendenhall Lake and Steep Creek to see wild bears chasing wild salmon within a healthy forest ecosystem. As we continued our hike high above at the headwaters of Steep Creek, bears and wolves had left sign of their travels. Old bear scats showed the last blueberries before hibernation. Among a prominent clump of trees the ground was littered with wolf scats, some ancient and some fresh. On a boulder at the head of the valley, Nick and I sat against our packs in the setting sun. We ate our snacks and sat with our binoculars, watching the valley below us. It was quiet but not silent. There was wind in the stunted spruce and cedar below us and the rush of raven’s wings above.

In his book “The Snow Leopard,” Peter Matthiessen presents the process of looking for the secretive animal as a Zen koan, a riddle to ponder but not solve. I can imagine him looking over a similar valley in the cold air and piercing sun in the remote Himalaya. “Have you seen the snow leopard? No! Isn’t that wonderful?”

Or as David James-Duncan asks in “The River Why,” if trout were easy to catch, would they be worth catching? If, as we sat, a wolf had walked out of the trees as the sun set and a cold wind rose, what then? Too many wildlife stories end with, “suddenly, the wolf appeared,” when nothing sudden actually happened. The animal was unobserved, and then it was observed. But in reality it was always there; I saw it in tracks and scat. I saw it in the eyes of skittish deer in a healthy forest.

We didn’t actually see a wolf. We walked down the mountain in the twilight, stiff and cold.

Even if we can’t see the discrete thing, the value is in looking. Climate change isn’t the rainstorm in January or the blizzard in May; it is seen in a subtle rise in temperature over time, slight changes in ocean acidity, or variations in precipitation or wind patterns. Climate change won’t make Alaska any less wild, but it will make wild Alaska potentially very different in the future. For the people who visit the Tongass, they have the opportunity to see a landscape full of drama and wildness, but also a landscape that is evolving. You’ll see it, even if you don’t actually see it. 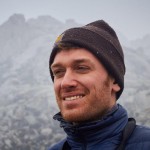 Dan is the League's Rainforest Campaign Manager based in Juneau, Alaska. He's never without binoculars for watching wild animals.